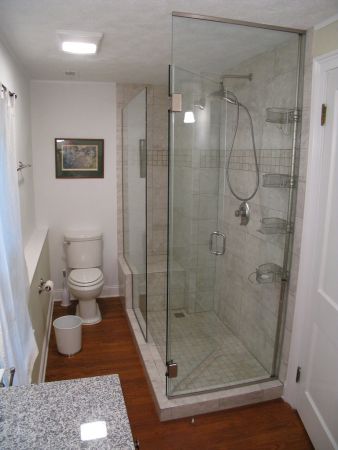 Not too long ago Precision Contracting was challenged to remodel the smallest bathroom (or toilet space) we had seen. It was located on the first floor of an old house originally built between 1900 and 1920. The room itself was located just off the kitchen next to a side entrance to the house.  The room measured two and a half feet by three and a half feet. It contained a toilet, a toilet paper holder and a waste basket. As you can imagine, the room was barely practical. This was particularly true when it came to washing your hands. The owners had asked us to remodel the kitchen and the upstairs master bathroom. As part of the kitchen renovation we considered removing the room and the toilet completely however that would have left the whole first floor without a toilet. While it presented a bit of a challenge we had some pretty good ideas about how to make it work.

There are a few things that can be done to take advantage of very small spaces. We used a few of these trick of the trade on this project.

While these five techniques were useful in this challenging project we do have a few others that we regularly incorporate into small bathroom redesigns that have a bit more space available.

Regardless of the amount of space you have there are always ways to efficiently and beautifully utilize the available space. We would be happy to show you how.

Should I Choose a Shower Curtain or Glass Door for My New Bathroom?
A “precision” niche