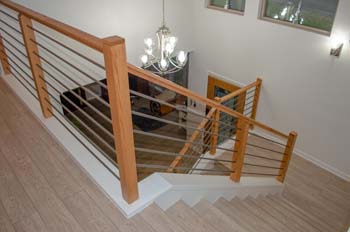 This month we're going to share something a little bit different. Our clients have been sharing with us that they'd like to see some examples of the projects and materials we've written about in past blog articles. We agreed that's a great idea so we've started posting some examples on Precision Contracting's Facebook page.

Here's one of our featured projects, a stairway and hallway remodeling project. The idea behind this project was to take an existing stairway and hallway and redesign them in such a way that there was feeling of more open space and improved air flow throughout the home.

As you can see, in the "before" pictures the layout of the stairway and hallway used a typical "closed" design utilizing standard sheet rock on top of 2x4 framing. This is one of the easiest and cost effective ways to build stairways and hallways. The downside to this design is that the hallways and stairways are closed in, restricting light and airflow throughout this living space.

In the "After" pictures you can see how we changed the design of the living space. We removed the walls around the staircase and the upstairs hallway. We replaced the walls with a beautiful open concept railing and balusters. The wire finish railings enhance the air flow throughout the living space. The new light fixture along with a fresh paint job significantly brightened the room. This new design also provides a sense of increased space between the first and second floors.

How About Your Home?

What a difference the newly opened space made in this home. Do you have high traffic areas in your home which could take advantage of these open concept designs?